Call now for a free esrimate.

Sump pump installations and rebates in the Toronto areas. 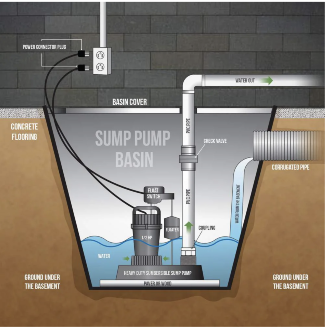 Call now for a free estimate.

Many older homes in Toronto GTA areas were built on hills

. Those that have basements below grade are sometimes prone

to basement flooding, which is why people need sump pump

installation services in Toronto. If your sump pump stops working,

water can quickly accumulate. We have been serving the Toronto

areas with quality sump pump replacement services for over 20 years

. Why choose us for a new sump pump: Family-owned and -operated

services Serving the local community for over 20 years Many happy,

repeat customers Our company founder has over 30 years of

experience in the trades, and we are proud of our team of professionals.

We believe in treating every customer as a customer for life, and we will

not leave the job until you’re happy.

The City of Tor

onto offers a subsidy of up to 80% of the invoiced cost, up to a maximum of $1,750, to help offset the cost of installing a sump pump. This subsidy is regardless of the number of devices installed at the property, including eligible labour, materials and taxes.

Be sure to maintain basement flooding protection devices according to manufacturer instructions. Keeping these devices in good working order is an important step in protecting your home against basement flooding.

Install a properly-sized sump pump to help pump water collected by the weeping tile system to an area outside. Make sure the sump pump empties onto a permeable surface at least two metres from the foundation wall.

Sump pumps can lose power during severe storms, so you may wish to consider a battery back-up. They also need to be inspected and maintained according to product specifications to ensure optimal performance.

The City offers a subsidy of up to 80% of the invoiced cost, up to a maximum of $1,750, to help offset the cost of installing a sump pump.

The City offers a subsidy of up to 80% of the invoiced cost, up to a maximum of $400 including eligible labour, materials and taxes, to help offset the cost of installing a sump pump.

With increasingly frequent severe weather events, it is essential

that homeowners take appropriate action to reduce the risk of

The City offers owners of single-family, duplex and triplex

residential homes a subsidy of up to $3,400 per property to

Disconnecting the downspouts from your property’s

eavestrough system is not eligible for a subsidy

If you have water in your Toronto basement from sewage,

burst pipes, or heavy rains, making sure your sump pump

is working properly is essential. Getting it clean and dry

again is not something that can be put off, and you need

to call usright away. Signs your sump pump needs to be

replaced: Sump pump fails to turn on Lous noise from

the sump pump. Pump continually runs Cycles on and off

irregularly Standing water in your basement If your sump

pump is experiencing any of these problems, you need to

get it repaired quickly. The average life of a sump pump

is around seven years, and if yours is around this age,

it’s probably time for a replacement. Many things can

affect the life of a pump, including heavy usage and whether

it has been maintained properly. If it’s time for a new one,

can help. We offer fast, reliable service at an affordable price.

We will respond quickly, and our we can diagnose the problem

in no time. Call us if you have water in your basement or if you

see signs of sump pump repairs or other problems, and we will

send someone out to you as quick as possible.

within what was once The Ward) Moss Park Old Town Quayside

East York Toronto An autonomous urban borough until 1997, East York is located north of Danforth Avenue between the Don River to the west and Victoria Park Avenue. East York was an exclave of York from 1922 to 1924. East York developed contemporaneously with the West End of old Toronto, and it is similar in form and character. In 1967, East York was expanded to include the Town of Leaside. Since the 1998 amalgamation, it is administered together with old Toronto, and separate from Scarborough, North York, and Etobicoke-York, by the "Toronto and East York Neighbourhood Council". East York itself is commonly divided into two zones with mainly Edwardian urban neighbourhoods situated south of Taylor-Massey Creek and referred to as Old East York. Old East York Broadview North Crescent Town East Danforth Pape Village Woodbine Heights Suburban East York Bermondsey Governor's Bridge Leaside O'Connor–Parkview Thorncliffe Park

York is situated between Old Toronto and North York, west of Bathurst Street (aside from the neighbourhood of Tichester at the southeasternmost corner of the former city, which extends as far east as Walmer Road and includes much of St. Clair West station). Weston was independent of York until 1967. York was a separate city until the 1998 amalgamation. Since then, York is often administered with Etobicoke as a single community council within the amalgamated city of Toronto. York is often divided to two sections: a western section and an eastern section; often, GO Transit's Barrie rail line divides the former city in two sections. Briar Hill–Belgravia Fairbank (Caledonia–Fairbank) Humewood–Cedarvale (includes Upper Village (also part of Forest Hill)) Lambton–Baby Point Little Jamaica (Eglinton West) Mount Dennis Oakwood Village (includes Five Points and Northcliffe; formerly known as Oakwood–Vaughan) Old Mill Rockcliffe–Smythe Silverthorn (Keelesdale) Tichester Weston

During heavy rain, the sewers can become overloaded. It is essential that homeowners take appropriate action to reduce the risk of basement flooding.

Owners of a single-family, duplex or triplex residential home can apply online for a subsidy of up to $3,400 per property to install flood protection devices. Eligible work includes: installation of a backwater valve; installation of a sump pump; severance and capping of a home’s storm sewer or external weeping tile connection. Disconnecting the downspouts from your property’s eavestrough system is not eligible for a subsidy.

Before proceeding to the online application, please review all sections below so that you can confirm that your application meets the program criteria.